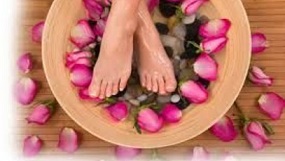 As we are in the last month of the year all of us have the opportunity to reflect on the year gone by, being grateful for any personal growth and development which often is bought about through times of adversity and personal challenges. In my last blog I wrote about the intense pains that I had in both my feet, one foot I thought being a sprained ankle and plantar fasciitis in the other. Despite my visits to my GP she felt that a referral was not warranted and she concurred with my diagnosis.

After nearly 5 months of unbearable pain where towards the end I could barely walk I decided to take charge by seeking the help of a Consultant Podiatrist who worked alongside foot surgeons and physiotherapists. Prior to this I had been seeing my McTimoney Chiropractor regularly who kept me well aligned and helped in reducing many of my symptoms, was having myofascial release work, had taken up Yoga to keep all the muscles relaxed and stretched as much as possible, was doing homeopathy, rehabilitation exercises for the legs and strength endurance of the upper body with my personal trainers, spraying magnesium oil and taking magnesium baths, icing, rolling a golf ball on the underside of the foot, resting, eating nutrient rich food and had taken up weekly mentoring/coaching based on my gene profile – so naturally I thought I was doing all the right things and I was getting relief but I was never pain free. I was about to learn a very valuable lesson.

“CORRECT DIAGNOSIS IS THE KEY TO THE CORRECT TREATMENT”

When I finally went to see my consultant at the end of August he asked me how I had managed to put up with such crippling pain?  I said “I thought that it was in my head as surely my plantar fasciitis pain can’t be this painful?”  At this point my “sprain” pain was slightly less in comparison – although both feet were in agony. He was astonished as he said it definitely wasn’t in my head and his concerns were quite worrying as the plantar fasciitis which was the correct self-diagnosis was the least concerning one even though the pain was so excruciating. I was sent off for 2 MRI’s, one for each foot and the diagnosis came in a few days later. It was definitely not what I or anyone that was treating me at the time was expecting.

I was immediately put in an “Air Cast Boot” – the one that footballers wear for 6 weeks as I was diagnosed with “Posterior Tibial Tendon Dysfunction or PTTD” as well as a “tear” through this tendon – most likely outcome was surgery as the damage was quite extensive. To make matters worse I had “adult flat foot deformity” so I was beginning to lose the arch in my foot, which would eventually end up arthritic. All of this was bought about by “wear and tear”.  Recovery from surgery was up to 6 months. I was devastated at this diagnosis as I simply had not considered it to be a possibility especially the surgery.

6 weeks of immobilisation was going to be purgatory for me. My freedom was taken away from me immediately as I could not drive, or stand for long periods of time so treating clients was going to be difficult and I could not work out as I couldn’t get to the gym. I had to find the balance between rest and activity as total immobilisation was not an option in case I got a DVT (blood clot) in the process. At the time of the diagnosis, I felt that my outlook was bleak and I questioned why was I getting “injured” all the time? Last year it was a torn cartilage in my knee that took 9 months to recover. The consultant tried to reassure me by informing me that the only reason my tendon hadn’t totally ruptured was because of my fitness levels and that my pain threshold levels must have been exceedingly high to have put up with the pain for so long. A rupture would have resulted in immediate surgery, so there was a reason to be grateful that this had not occurred although in my shock I couldn’t see that at the time.

The other foot in the consultant’s words was “nasty plantar fasciitis” with marked thickening and swelling of the plantar fascia – the underside of the foot. His opinion was that this had occurred as I was putting weight through this foot to avoid the pains in the other, a compensating effect. I was to continue with stretching and icing and staying off my feet as well as keeping mobile, a fine balance to try to achieve. I left his clinic in my new boot feeling quite dejected trying to accept the result.

Within a few hours of leaving I was receiving offers of help. The support that I have had during this time has been incredible and humbling as I began to experience the generosity of so many kind people, some of them listed below to demonstrate how important it is to have a support network at times like this and how each one of them has helped me on this arduous journey to recovery. Their contribution has been invaluable and much appreciated.

Initially on wearing the boot I wanted to quit and hide as it was a hindrance, cumbersome and fatiguing me and my self-confidence had taken a severe knock. The day after my cast, when I was feeling extremely low and self-conscious, struggling to find balance as I hobbled about, one of my personal trainers came to pick me up at 7am on a Saturday to do a training session at my gym. His attitude was very much it’s your legs that are out of action not your entire body! This was exactly what I needed to hear to get me out of the victim mode fast. If my trainer was committing to show up, pick me up and train me, then the least I could do was take some responsibility by being ready to do as he asked and trust his ability and guidance to help me over the next 6 weeks. In fact both my trainers have guided, trained and encouraged me immensely over this period and I am indebted to them for going beyond the call of duty. At times in my sessions I have been frustrated and tears have been shed and at other times personal best scores have been achieved – with my leg in a cast!!

My weekly health coaching sessions have been a lifeline for me and I am grateful to my health coach for being so patient with me especially when I’ve not delivered. I have given him countless opportunities to quit on me so that I wouldn’t have to take responsibility. Instead he chose to stand by me and not allow me to walk away. He has undoubtedly shown me what it means to take responsibility no matter what the circumstances are. He has instilled in me that despite the adversity that I was facing this was a time for opportunity, growth and new discoveries. His suggestions and guidance have helped my recovery on a physical, emotional and mental state and in the process I have rediscovered my passion for art, creativity and writing.

My McTimoney Chiropractor and Myofascial Therapist made sure I didn’t get any further imbalances/misalignments due to the compensating going on in my body. I was beginning to ache in my lower back as a result of wearing the boot. Their care was precious, nurturing and healing and they gave me hope at a difficult time.

Thank you to my clients who have been incredibly patient and loyal as I reduced my work load substantially – their loyalty to me has been astounding despite my recommendations that I find them an alternative McTimoney Chiropractor. It has been extremely hard for me to take responsibility by putting myself and my health first but they have understood and sympathised far better than I gave them credit for. Who better to understand pain and what I was going through than the majority of my clients?

Lastly the support my family and close friends have given me throughout this has been immeasurable. They have helped me see light at the end of the tunnel and provided the love, laughter and humour along the way.

Unfortunately my cast didn’t come off at 6 weeks and I was disappointed to say the least. Within days of wearing it the swelling had significantly reduced and the pain had started diminishing.  The consultant was happy with the progress and pointed out that I had been saved from surgery but wasn’t quite ready to remove the boot. He recommended another 4 weeks of immobilisation and to continue with all that I was doing with my support network as they were key players in my recovery having a huge positive impact on me.

Finally at 10 weeks my cast came off! I was ecstatic and ready to do cart wheels except I was warned against it. I have started a course of physiotherapy recently and am confident that through rehabilitation and functional exercises I will overcome this injury 100% and come out at the other end physically and mentally much stronger. Improvements are already on the horizon with the arch of my foot returning and my confidence in my ability to do things growing.

It’s been quite a journey of ups and downs which has taught me that when faced with such extreme pain, the challenge is to be resourceful, positive, determined and courageous, and find a way to carry on. I hope that my readers feel inspired in knowing that despite the challenges and the curve balls that are thrown at them there is always a way of getting up again no matter how many times they have fallen.

“Our Greatest Glory Is Not In Never Falling But In Rising Every Time We Fall.”