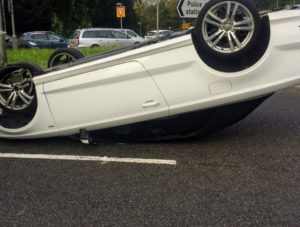 A few days ago I got a distressed call from a client aged 23 after she was involved in a severe car accident where the car had flipped over on to its head.

It was rush hour and she was commuting on her regular journey to work that she was familiar with. As she crossed a roundabout where she was heading straight a car cut her up turning right totally oblivious to what their actions would lead to. In order to avert the car my client hit the high kerb after the roundabout and her Audi 3 Cabriolet overturned. Fortunately she was extremely lucky and alive to tell the tale, walking out with shock, cuts and bruising. The German car had most definitely helped in protecting her too and thankfully the sunroof was not down otherwise the outcome could have been very different.

“We only have what we give.”
― Isabel Allende

6 hours after the accident I was treating the client with McTimoney Chiropractic as she was aching from the jarring and the bruises were coming out. She had been having treatments with me since she was young as she was gaining height fast so getting the odd episode of back pain and muscular aches too. It’s at times like these that I feel incredibly privileged with my skills and that I am in the position to be able to help someone out quickly.

I must emphasize that she was only treated by me after she was medically checked out in hospital with X-rays being taken and given the all clear. She wasn’t concussed or had any fractures and was advised to take a few days rest and paracetamol if there was any undue pain or discomfort.

It was imperative to treat her swiftly after the accident as her alignment would have been affected by the jarring of the impact and being suspended upside down in the car. She was out of alignment in particular in her neck, rib cage, and spine. All of this was corrected with McTimoney Chiropractic, a method renowned for its singularly gentle manner and for treating the whole body at each session. The adjustments are exact, skilful and very quick, resulting in the minimum of patient discomfort; hence the client could receive the session immediately in the aftermath of the accident.

In nearly 28 years’ of clinical experience I have found that trauma to the skeleton can often manifest in problems many years later after the incident. Incidents such as skiing injuries, horse falls, cycle collisions and tripping over pavements head first can all have a detrimental effect on the alignment. I have seen all of these in my practice and have treated them with varying degrees of success with McTimoney Chiropractic.

Thankfully, the client was very aware of the importance of being treated early on after the car accident and hopefully as a result she will have saved herself from being affected by it in the long term. I have checked in on her daily and will continue to do so for a week. Currently she is fine and without any pain post treatment. Also she is extremely grateful to be alive and convinced that her recovery was accelerated by McTimoney Chiropractic.

“If the only prayer you said was thank you, that would be enough.”
― Meister Eckhart

It is with her permission that I have written this piece and used her photographs.